Those of you what have fallyed this wabsite over the last wheen o' years will have noted that Ah havnae been postin' tae much o' late, somethin' fur whit Ah kin oany apalagise. Thus Ah hiv remained quiet durin' some momentous events - the G12 Summit, the Queen goin oan her hallydays til the Free State, the Arab Spring, and, o' coorse, the Fleg Crisis.

As a tap academic Ah chose fur til remain aloof frae the proceedings, leaving the palitics til the paliticians an' thon boy Willie Frazer, bidin' ma time til quietly in the backgroun'. Howiver Ah think Ah micht hiv hit oan a solution til this crisis - yin which will allow both sides til move oan wi'oot loosin' face, an hiv thus contacted Belfast's new Laird Murr, a Shinner by the name o' Martin O'Muilleoir, wi ma proposal. This Ah hiv set oot fur yis below - it isnae in Ulster Scots, fur judgin' by the way he spells his name he'd hiv nae clue whit Ah' was oan aboot. Ah'm sure he kin git someyin til translate it frae English fur him. 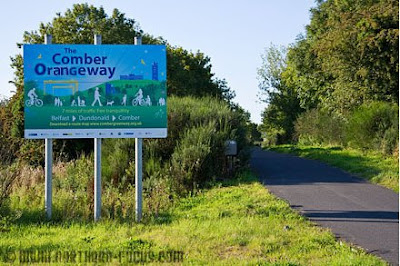 You will no doubt be aware that there has been something of a crisis in community relations in Belfast since the Alliance Party took the fleg down off City Hall last November. This crisis has been brewing for a long time, and it is now the perception amongst those of a Unionist persuasion that they are becoming second rate citizens in their own city. This is spilling over into all kind of bother, and I, for one, reckon that the marching season might be quare crack this year as a result.

However I think that I might have hit on a possible solution to this problem, and therefore thought I'd get on til you. What is needed is a gesture from the Nationalist Camp which shows that they aren't always nicking stuff like flegs, and as a Shinner Mayor you'd be just the man to take my proposal forward - namely the renaming of the Comber Greenway as the Comber Orangeway.

Now - I know what you're thinking - you're thinking 'That's crazy talk, McWilliams, that will never work!', but you'd be wrong. You see, a bit like the fleg being on the City Hall 365 days a year before Naomi Long took it down, the Greenway is called the GREENway 365 days a year. Green is, of course, the colour of the Free State (no offence) and, as such, it is a divisive colour which makes Unionists feel unwelcome. In the interests of parity of a steam it should be renamed the ORANGEway, thus reflecting the fact that it mainly passes through Unionist areas.

However I accept that calling it the Orangeway all year round might irritate yousuns and, to be fair, it is right and Green in colour, so it could be called the Greenway on designated days - the anniversary of the Easter Rising for example, or Gerry Adams' Birthday.

Anyway, you think about it, and give me a shout if you need any further advice on this or any other matter. (if it helps with your deliberations I've made a picture for you to look at.)