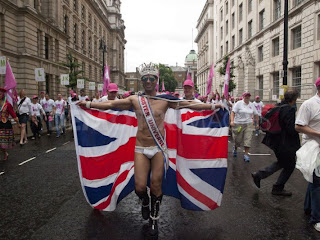 By the time youse read this letter we will have drawn the curtain on that most hallowed time of the year - the marching season. At this stage only the Royal Black Preceptory's special day out - Black Saturday - remains, and as usual I have perused the pages of this fine newspaper to locate the various parades. I thus note that the Sir Knights (a bit of tautology there perhaps?) of Co Down are assembling in Banbridge, for what will surely be a most auspicious parade.

However I also note an event clash of epic proportions in that County for on the same day there is a Big Jessie event thing in Newry - namely their Gay Pride Festival.

"This cannot be right", thunk I. "What of the Sir Knight who plays for the other team and wishes to join in the festivities of Newry? And what of those folk at Newry Pride who accept that oranges are not the only fruit, and would like to enjoy the parade in Banbridge?"

This is clearly an oversight on the part of the organisers of each event, and a clash that should be avoided in future years. However it has a occurred to me that we should treat this as an opportunity rather than as a problem. For why shouldn't the two groups sit down and come up with a combined event in Newry City in 2014? The benefits for each side are manifold, as I shall detail below:
I, of course, am happy to make myself available to co-ordinate the efforts to combine these events, in return for a large fee.

Fair fa ye! Sorry about the clash. We only picked Black Saturday to ensure good weather ;-). The orange is in fact already there and there is always room for Black and purple in our flag. We appreciate that 1690 is important in the PUL culture however 69 is very important to us ;-) - anniversary of the stonewall riots in 1969. Any pride parade in the wee north is always the most cross community event you could conjure up and we in Newry would certainly embrace out LGB and T brethren from near and far. Happy Black Saturday from all the big jessies in Newry