Ah hid occasion fur til putt doon me usual Newsletter (official organ o' the Ulster Scot) an' peruse the Belfast Telegraf the o'er day, an' was maist interested til see thit they are havin' a vote as to whit wud be the tap yin  o' the "Seven Wunders o' Nairthern Ireland".  Sae far we hiv such wunders as "Belfast Taxis", naminated by Jim McDonald frae Coronation Street, who Ah thunk was in jail, an' Glenarrif, naminated by the poverty struck SDLP heid yin, Alasdair McDonnell. "The Glens," he says, "chase politics from my mind." Clearly he is spennin' tae much time in them.  Anyhow the raison Ah was interested is that Ah had been givin' some thocht til a similar list o' Ulster Scots Wunders, an hiv duly perused the original Seven Wunders o' the Ancient Wurld fur inspiration. Thesuns appear til be....


Surely now, Ah thunk, there is nae mair interesting, ancient an' civilised folk than the Ulster Scot. We are boun' til be able tae match thy'on, an' thus Ah am able til offer yis a new poll on.......


Themuns in Babylon seem til have fancied their horticultural skills, but ye can bet they'd hiv nathin' til compare til the swings at Cloughey or indaid the dual play park combination boasted by Portavogie. (There is yin behine the Chinese, an' yin at the far end near the pubic convenience.) Even Ballyhalbert has a fine playpark an' it disnae saim til have any folk livin' it. An Ballywalter has tennis coorts. Nebuchadnezzar ma arse.


And lo' the guid folk o' Ulster didst decide fur til erect a statue o' King Billy, yin that wud commemorate the 300th anniversary o' the Glorious Revolution an' his majesty landin' in their fair town, yin that would reflect the great man's martial skills an' inspire local an' tourist alike. However they hadnae any money so they stuck up a wee totty one o' him thit yid hardly notice an' appears til have Billy lukkin intil the coach park.


Also knain as Sammy Wilson. Red o' cheeks, amusin' o' hair, crap at sums an' bare o' bum. There can be nae other, an' nor shud there be. 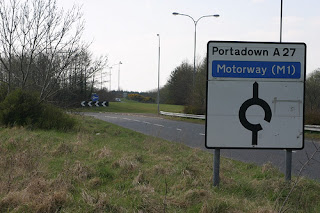 
Alsae knain as Martyrs Memorial Free Presbytron Church. Fur years the guid folk o' Ulster could flack til hear the preachin' o' Arsemis hissel, but he has retired now, til be replaced wi' a similarly mental heid yin, but nat yin that Ah can either mine the name o', or be arsed lukkin' up.


There can be few o'er cultures in the wurld that have anythin' til compete wi' the momentous occasion that is the 13th at Scarva. Where else wud thousans o' folk gather fur til watch a lock o' men in suits danderin' alang behine a rake o' half cut bands playin' hymns on flutes? Where else wud news raiders make the same joke on an annual basis aboot who wud win a sham ficht before handin' o'er til Angie wi' the weather. Wi' a range o' stalls an' burger vans unsurpassed in the civilized wurld the inherent Wunderfulness o' the Great Parade shud be clear til yin an' all.

There, a half arsed list o' interestin' cultural tourist attractions allowin' yis til vote as yis see fit. Sure it is better than the yin in the Telegraph, an' ye dinnae hiv til raid a rake o' shite writ by some celebrity.

Posted by Professor Billy McWilliams at 19:09